It comes as little surprise that the Great Recession had a significantly negative impact on employment opportunities. The peak of the downturn’s effect on underemployment occurred in 2010, when about 10% of college graduates were considered “underemployed” (i.e. unemployed, working part-time or not seeking employment), according to a study by Georgetown University’s Center on Education and the Workforce.

1 in 10 people underemployed sounds bad, but college grads (not surprisingly) fared significantly better than their less-educated counterparts. As you can see below, workers whose highest level of education was a high school diploma saw their underemployment rates surpass 20%, and high school dropouts topped out at nearly 35% in the peak of the Recession. 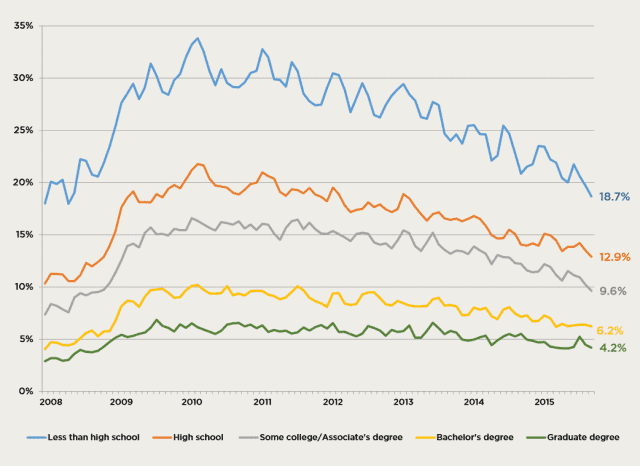 Also notable in the chart above are the size of the peaks and valleys – with each progressive step in education, the underemployment rate fluctuates less.

All in all, the impact of the recession on underemployment has in effect been entirely restored in the five years since, but those who are less educated are still significantly more likely to be underemployed.