Paying for college can seem daunting considering the seemingly endless stories of college graduates burdened with incredible amounts of student debt. But are these anecdotes really representative of the norm?

Economists at the Federal Reserve Bank of New York don’t think so. Jaison Abel and Richard Dietz – who have researched the topic of higher education for years – found that while recent college grads have struggled during the Recession, they’ve done better than most believe.

Here are some key points of Abel and Deitz’s analysis:

Although about 45% of recent bachelor’s degree recipients have been working in jobs that don’t require a college degree, only about 19% of these (or 9% of all recent grads) were working in low-skilled jobs. This is far from the idea that college grads as a whole are doomed to wither behind a coffee shop register. 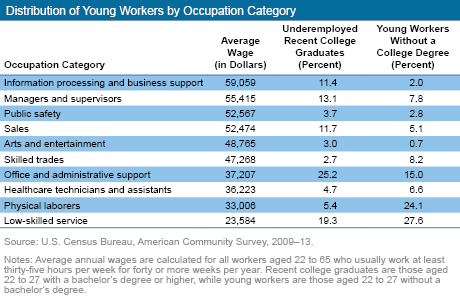 More importantly, from 2009 to 2013 about 40% of underemployed recent graduates were working in the four highest-paying categories of non-college jobs, while only 18% of non-degree workers could say the same. So even if underemployed, college grads were more than twice as likely be working in higher-paying jobs as were workers who lacked a college degree.

A college degree serves as a shield against a poor economy, but it doesn’t guarantee a good job—many grads have still been burdened by student debt. The question is this – are colleges doing enough to help these graduates?